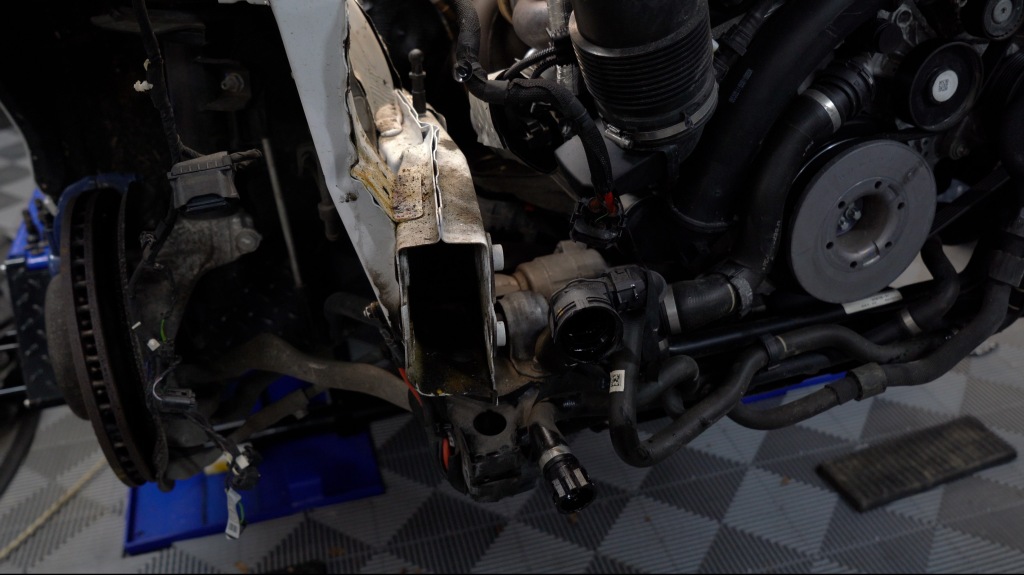 Not only does our BMW have fresh energy, we have it too and go about dismantling the damaged parts of the 2 Series in good cheer.

At first glance, it was the front apron including all add-on parts – even the kidneys were damaged, the headlights and the bonnet including the pedestrian protection.

Gradually, however, even more damaged parts have been revealed, including the lock bar, the impact protection and the radiator package. Alright, that’s a lot now, but as long as the frame is okay, we just get these parts new, replace them and have our little M back on the road in record time.

We recorded the whole project on video and publish it on our YouTube channel every Wednesday and Sunday at 19:30. Feel free to check it out!

Part 4: The whole front needs to be replaced

After two hours of letting the screws fly, we dismantled the entire front of the car. In the process, Robert and I noticed damage that indicated a harder impact than we had initially suspected. One indication of this were the headlights, where almost all the holders and also large parts of the housings were broken.

So it happened that after dismantling the impact protection and the radiator package, we noticed a deformation on the frame. Not really bad, but still visible and there is no question that this damage has to be repaired, after all we want to auction the car for a good cause at the end of the repair. And the better the repair, the higher the proceeds.

It’s about the details

So the longest video so far gets the shortest blog post so far. Take a look at the video yourself and get an idea of the deformation that has taken place!

We look forward to see you in Part 5!

iThere are no comments

Begin typing your search above and press return to search. Press Esc to cancel.